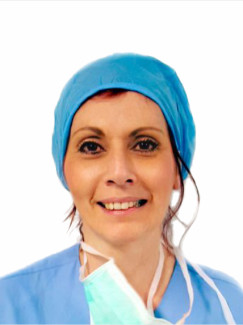 Dr. Dimitra Giannopoulou studied and obtained the title of specialty in anaesthesia in Thessaloniki. She has many years of experience as an ICU on-call anaesthesiologist and she is an associate of the U4U urology team at the Interbalkan Medical Centre.

Ms Dimitra Giannopoulou attended the Medical School of the Aristotle University of Thessaloniki from where she graduated in 2002. Following this, she got the title of specialty in anaesthesiology at Saint Paul Hospital in Thessaloniki in 2010.

She worked in private country clinics (Veria, Corfu) on general gynaecological procedures as well as obstetrics cases. During the period 2011-2014 she remained at the Interbalkan Medical Centre as on-call doctor in the Intensive Care Unit. From 2011 to today she remains an on-call associate of the IDK delivery room and an associate of the U4U urology team.

She holds the following certifications: