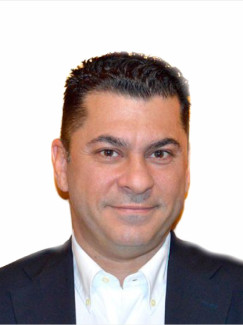 Dr. George Iliadis studied in Thessaloniki where he also got the title of specialisation in Radiation Oncology. He has a Phd from the AUTH. Since 2007 he works in the Interbalkan Medical Centre and since 2009 he is the Scientific Director of the Radiology Department. He works with the U4U Urology team for patients needing radiotherapy.

With a decision by the Ministry of Health in 2001, he trained for 6 (six) months in the Radiotherapy Department of The Netherlands Cancer Institute / Antoni van Leeuwenhoek Hospital, Amsterdam, Netherlands, on varying aspects of modern Radiotherapy, focusing on radiotherapy with intensity-modulated fields (IMRT) and other techniques of conformal radiotherapy.

In May 2007 he trained at the Stanford Cancer Centre, USA, on advanced technologies (CyberKnife Robotic Radiosurgery, Trilogy, IGRT, 4D planning).

He has attended a multitude of further training courses.

From 2003 to 2007 Dr. George Iliadis was a Consultant of Radiotherapy at the G.P.N. Papageorgiou General Hospital. Since 2007 he is an associate and since 2009 the Scientific Director at the Radiotherapy Department of the Interbalkan Medical Centre.

He received the award for Best Announcement by the Organising and Scientific Committee of the 6th Radiation Oncology Pan-Hellenic Conference of the Hellenic Association of Oral and Maxillofacial Surgery.

Dr. George Iliadis was honoured as a speaker / round Table President / Member of the Organising & Scientific Committee in a large number of Greek conferences.