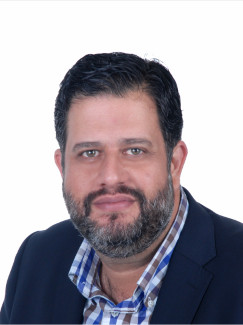 Dr Konstantinos Kargiotis is an Internist with a degree from the Medical School of Ioannina with a specialty title from the 2nd Clinic of Pathology of the Ippokrateion Hospital of Thessaloniki. He is an associate of the Interbalkan Medical Centre and he is the Director of the I’ Wing and Palliative Care Department at the Arogi Physical Rehabilitation Centre. He works with the U4U urological team on issues of his specialty.

Dr. Konstantinos Kargiotis is an associate Doctor and On-call Internist at the Interbalkan Medical Centre. He is also an unpaid Scientific Associate of the 2nd Propedeutic Pathology Clinic in the Aristotle University of Thessaloniki and Director of the I’ Wing and Palliative Care Department at the Euromedica Arogi Physical Rehabilitation Centre.

In September 2010 he received an accolade from the Hellenic Atherosclerosis Society for the acceptance of an article-study by The Lancet medical journal.

He won a scholarship by the Hellenic Atherosclerosis Society (2009-2016)

The doctor has many publications and participations in international medical conferences.