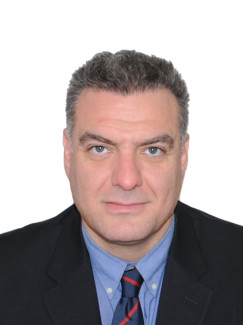 Dr. Dimitrios Karagiannis was born in Volos in 1978, he is married and he is a father of two. He completed his undergraduate training in Kosice, Slovak Republic. He completed his residency in Urology in Athens,Greece, and he was awarded the PhD Title from the Medical School of Athens. He has completed a 3 year Fellowship in Minimally Invasive Urologic Surgery including Laparoscopic / Robotic Surgery and Endoscopic Treatment of Urolithiasis.

Dr Dimitrios Karagiannis received his medical degree from Pavlov Josef Safarika University Kosice, Slovakia in 2003.In 2004 he aced the equality recognition exams held by the Department of Medicine of the Greek Higher Educational Institutions.

He did his rural service and completed his military service in 2005 and 2006 respectively.

In 2007 he entered his Urology residency training program which he successfully completed in 2014 being awarded the title of Urologic Surgeon. In 2008 he traveled to U.S to complete electives in Internal Medicine in St Elizabeth Medical Center in Boston as well as in CVT Surgery in University of South Alabama In 2009 and 2011 while still in training he successfully sat for the United States Medical License Examinations in Atlanta and Virginia U.S.A. In 2013 he traveled to New York, U.S to attend the International Robotic Fellowship Program under Prof. Dr Ketan Badani.

In 2015 he received his PhD Title with honors from the medical school of Athens and in the same year traveled to Glasgow, Scotland for a two year fellowship in Laparoscopy of Upper Urinary Tract / Endoscopic Treatment of Urolithiasis in Lanarkshire NHS Trust familiarizing himself with radical nephrectomies, partial nephrectomies and pyeloplasties and at the same time getting hands on experience in flexible ureteroscopies and supine percutaneous neprolithotripsies. In the same year he was awarded the FEBU title (Fellow of European Board of Urology).

In 2017 he commenced a Robotic Radical Prostatectomy Fellowship in Western General Hospital in Edinburgh under Prof. McNeil.

In 2018 he returned to Greece and served for 10 months as Consultant Urologic Surgeon in the State hospital of Volos,before starting his own private practice in Volos which is his current professional status.

He has participated in scientific essays, lectures and laboratories in Greek and international conferences and has authored articles in scientific journals.

He has also published papers regarding his PhD thesis “Role of heavy metals in the pathogenesis of benign and malignant diseases of the Urinary Tract”.